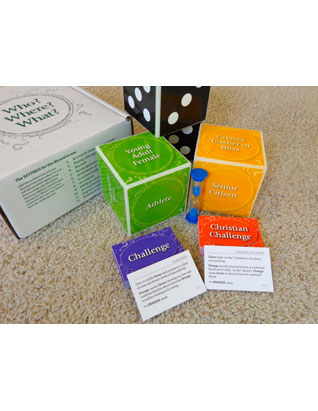 A role-playing game to develop and clarify values. The game goes in three stages:

1. Who? Role the colored dice to discover the role you will play, such as young adult female, unpopular teen, athlete, a mother, brother, senior citizen, etc.

2. Where? Role the two dice and add the numbers to identify the setting where you will role-play. The numbers with their corresponding descriptions can be found on the side of the box. These include at a concert, in a restaurant, stuck in an elevator, at a varsity game, in a church lobby, etc.

Play the game with two people in front of others, or divide everyone into twosomes and have everyone role-play the same situation simultaneously.