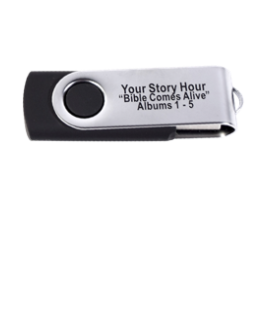 This USB includes “Bible Comes Alive” albums 1-5. All stories are narrated by Uncle Dan and Aunt Sue. Listeners of all ages will enjoy hours of classic stories!

Album 1 begins with Adam and Eve and continues through the Old Testament including Noah, Abraham, Isaac, Jacob, and Joseph, concluding with Moses and the Red Sea.

Album 2 starts with the Israelites in the desert and concludes with David running for his life from King Saul. Other Bible characters include Miriam, Baalam, Achan, Joshua, Gideon, Samson, Ruth, Samuel, Jonathan, and the giant Goliath.

Album 3 opens with David as he becomes King of Israel, and continues through Bible history from Mephibosheth, Bathseba, Absalom, Adonijah, Solomon, Elijah, Ahab, Naaman, and Hezekiah to the beautiful Queen Esther.

Album 4 includes Queen Esther saving her people and moves through Bible history to include Job, Nebuchadnezzar, Daniel, and Jonah. It concludes with the wonderful story of Jesus' birth, John the Baptist, the calling of the Disciples, and Nicodemus.

Album 5 continues through the life of Jesus. It covers the Phoenician woman, the transfiguration, Lazarus, Zaccheus, the Last Supper, and the Crucifixion and Resurrection, and the Early Church including Stephen, Saul, Peter, Paul, and Silas.