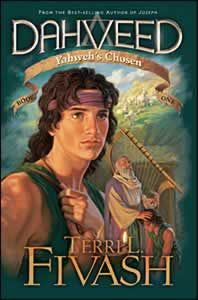 He was unwanted, unclaimed, unimportant . . .

Until the prophet demanded his presence at the feast of the new moon and secretly anointed him king of Israel.

There was no one to confide in, no outlet for the burning questions—his secret was safe with no one. But the Habiru guessed and swore their allegiance to him. The final words of a dying warrior seared into his soul: “Yahweh has given you much. Take only what comes from His hand. He will place you where you need to be so that you will be able to do the task given to you.”

He would cling to these words for strength time and again as Yahweh led him first into the court of the troubled king, then onto the battlefield to face the giant Goliath—all the while binding his life and loyalty to the prince whose throne he must someday take.

He was Yahweh’s beloved one, Israel’s Dahveed.