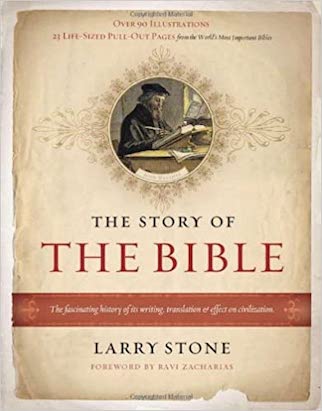 The Story of the Bible

In 1844 a German scholar traveled ten days by camel to a monastery guarded by the 1,100-year-old skeleton of a janitor, where the scholar discovered the world's oldest complete copy of the New Testament.

In 1947 the oldest complete manuscript of Hebrew Scripture disappeared in Syrian riots. Part of it was later recovered, and a full page and a fragment were also discovered in Brooklyn, New York.

In 1536 William Tyndale was burned at the stake for the crime of publishing the New Testament in English.

The Bible is a remarkable collection of books and letters, written by more than forty authors over a period of 1,500 years. Its words have been studied, disputed, and treasured. They have also brought comfort, conviction, and challenge. Today at least one book of the Bible is translated into more than 2,400 of the world's 6,900 living languages.

The Story of the Bible is a sweeping panorama of the Bible's 3,500-year history, answering questions such as: How accurate are the manuscripts we have? Do all translations say the same thing? Was America really founded on the Bible? Why are the Dead Sea Scrolls so important?