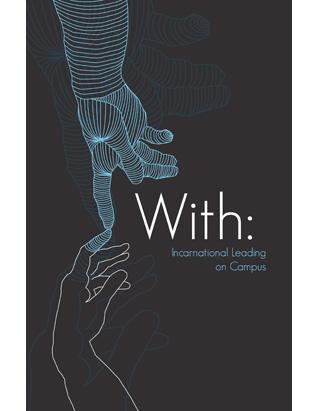 WITH Incarnational Leading on Campus

Some people seem more gifted than the rest of us at being present—they just faithfully show up. When they leave, it’s not because they’ve got a task to run to but because we’re done venting, crying, or whatever the reason for their presence. We look at them with defeat in our eyes. “They’re naturals!” we say, exasperated and jealous.

Those who have learned to be with others in an incarnational way have joined hands with Jesus, embracing His example. “The Word became flesh” so that we can make the choice to live eternally with God one day soon. And until that time begins, we get to begin living out the incarnation here on earth. As a student, this means that how you show up on campus matters, whether in the classroom, the cafeteria, or the quad.

The essays in this book reflect some of that incarnational perspective and have been crafted with you in mind. Written by students, campus ministers, and others who know that the call to incarnational living is real, our hope is that you’ll not simply read and be challenged but desire that God completely transform you into the incarnational leader He wants you to be.

Leader? Did someone say leader? Yup! That’s you. So why not embrace this challenge: become an incarnational leader, someone who intentionally connects first with God and then (with the Spirit’s guidance) with others, in ways that matter beyond the moment. That’s the power of the incarnation—it moves us forward to the kingdom. That’s good stuff!